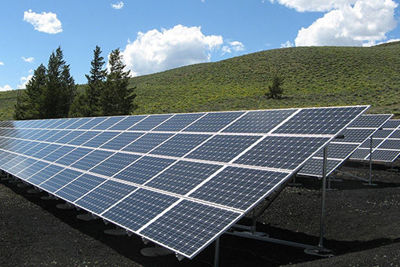 You’ve probably seen those large metal and glass panels installed atop office buildings or houses. Or maybe you’ve seen fields filled with these panels, all angled directly at the sun. It may come as no surprise that these are solar panels and, through some sort of scientific wizardry, they’re used to create electricity out of sunlight.

But how do they work? How expensive are they? And what good are they?

There are actually a number of different kinds of solar energy panels, like solar heating, solar thermal energy, solar architecture, molten salt power plants, or artificial photosynthesis panels that perform different solar related-tasks, but for the purposes of this post, we’ll focus solely on those called “photovoltaic panels (PV),” which convert sunlight into electricity.

The way they work is fairly straightforward. These systems consist of the solar panels (which are made up of solar modules, each consisting of a number of solar cells) which convert sunlight into electricity. A solar inverter then takes that electricity and converts it from a direct to an alternating current.

Not long ago, PV panels were an expensive proposition, making them cost-prohibitive for most households and businesses. But in the last few years, the cost of PV panels has dropped by a factor of 10 in some regions. In sunnier areas, solar energy sourced from PV panels may be the cheapest source of electricity.1

But solar panels don’t just work for creating large amounts of electricity. Solar panels can also be form-fitted for smaller applications, which you’ve no doubt seen, like watches, calculators (yes, they’re still around), outdoor lighting, and traffic signs and signals.

Once installed, solar systems generate only insignificant amounts of greenhouse gases. And as long as the sun is in the sky, they’ll continue to generate power. Plus, they don’t require mining or destruction of the earth to function. They won’t spill dangerous chemicals, so they’re not a threat to the ground or water. They don’t emit any form of exhaust, so they don’t threaten the air. And since they don’t harm the earth, air, or water, they pose no threat to public health.

As for the future of solar energy, here’s what Forbes magazine had to say:

“By 2030, solar will make up 20% of U.S. electricity generation. This will be buoyed by progress in wind energy, storage, and other clean energy sources. And while our goal is attainable, it is not inevitable.

“If we’re successful, the payoff will be enormous. By 2030, we’ll drive $345 billion into the U.S economy and offset 35% of all electricity sector emissions. The industry will employ more people than every U.S. company except Walmart. Americans will enjoy lower energy bills, greater energy choice, and cleaner air.”2